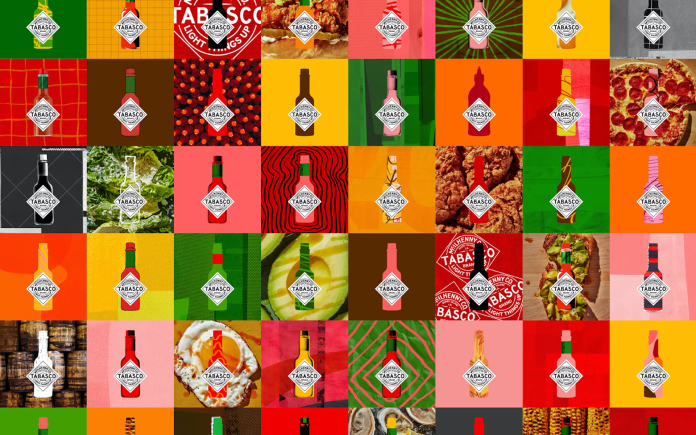 McIlhenny Company’s Tabasco has been working with agency Mrs&Mr to develop a new creative and inspiring visual identity. Tabasco, founded by Edmund McIlhenny in 1868 on Avery Island, Louisiana, it was here that he developed the recipe for its original red hot pepper sauce.

To this day, the company is still family-owned and operated on Avery Island. But it has also earned a whole host of fans around the world, including the crew on NASA’s space shuttles, where it is used to give notoriously bland astronaut food a bit of a kick.

Up until now, however, the Tabasco brand has never had a unified visual identity. New York creative agency Mrs&Mr was tasked with creating its first visual identity system, to be rolled out across all communications globally.

Based on the new tagline “Light Things Up”, the fresh look blends the hot sauce’s familiar brand elements with bold new graphics.

The branding eschews clichéd imagery of flames and explosions in favour of vibrant illustrations and graphic elements, which can be adapted to local marketing needs around the world.

Key new design elements include a refresh to the Tabasco diamond logo and a halftone bottle treatment that provides a more hand-made, illustrative feel.